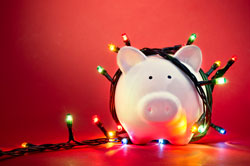 Money Crashers offers the 9 Best Ways to Save Money During the Holiday Season.

‘Tis the season to start trimming – your budget, that is, and not just your tree. A November 2013 Gallup poll found that while the average American originally expected to spend around $786 on the holidays back in October, that number is now down to $704. While it’s true that the general public might have a little less to spend, that reduction is also indicative of the changing mindset of spending as a whole. Consumers with big eyes are now wary of a volatile market and, consequently, of putting too much of the holiday season on plastic. This means more restricted budgets.